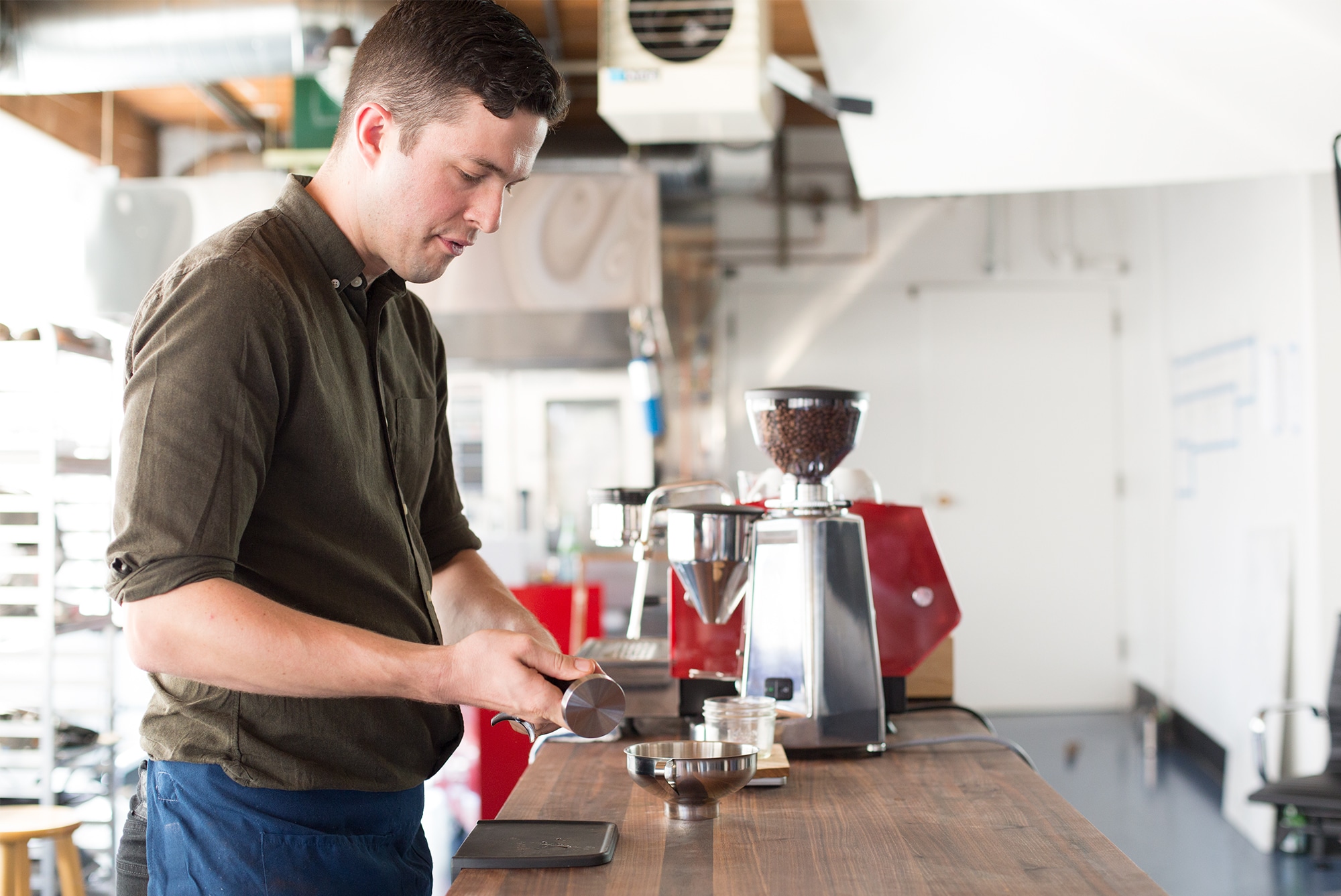 You may remember—about a month ago—we did a survey of our readers to learn about people’s drink preferences. Well, the time has come to look at the results, and we’ve enlisted the help of current US Barista Champion Charles Babinski to help us understand the results and hear how to make the best drinks for people’s preferences.

Charles is a fascinating man with a lot of thoughts to share, so we’ve broken up this interview into two parts, with the first one focused on his philosophy behind straight shots and milk drinks.

Question: How do you feel about straight shots of espresso?

LM Home: We found that people love their straight shots, and generally tend towards liking short to medium in terms of shot sizes. I know that at G&B you pull longer shots, so can you share with me a bit of why that is? If someone is really looking for that syrupy, heavy consistency of a shorter shot, do you have any pointers on how to make it as tasty as possible?

Charles: The shot size thing is super interesting, because it is a mixture of a bunch of different things, it would be very straightforward if everyone who consumes straight espresso kinda knew everything about it and had the right context for it, but realistically that’s not the case.

I think there’s a bias in the people who respond in that the majority of people who are established coffee geeks came up in America in a time when short shots were pretty much the standard, so that’s what they’re geared toward if you’re talking to people whose experience is Italian coffee, then short shots are insane.

One of the reasons we pull the shots the way we do, one is we want to make a type of espresso that fits the coffees we use, right, that have a little more acidity, it’s not a super light roast, but there is acidity, and if you have a presence of acidity at a high concentration it’s going to be less pleasant. So we pull shots that give us a balance given the coffees and flavors we like. That winds up being a little more concentrated than the Italian standard, but a good bit less concentrated—8% versus say 11 or 12%—than the third-wave [short] espresso.

If you are pulling short shots, the number one thing is you have to roast out that acidity. I don’t have a whole lot of experience with these types of coffees, but it seems like the people who pull those shots tend towards coffees that might be considered “baked” in other circumstances. So like really long roasts, long and slow.

I don’t think there’s a style of espresso I’m absolutely in love with compared to another, but I’m not a fan of the super short shots, you know the 20-in 20-out—I understand the appeal, the strength, the impact, but they don’t tend to have any pleasant lingering flavor.

That said, one of the things with espresso, with specialty coffee, in the industry, is that we focus too much on flavor, especially baristas, which makes sense for coffee buyers and roasters, but it doesn’t make sense for baristas. There’s so many other things if you’re assessing the customer’s appreciation of espresso, flavor is just one of them. So I can understand why a short shot might appeal to someone, but it’s not my personal preference.

The coffees I generally like have a good bit of acidity, and other attributes that make them harder to pull at those higher concentrations.

Question: How much milk do you generally add to your espresso? 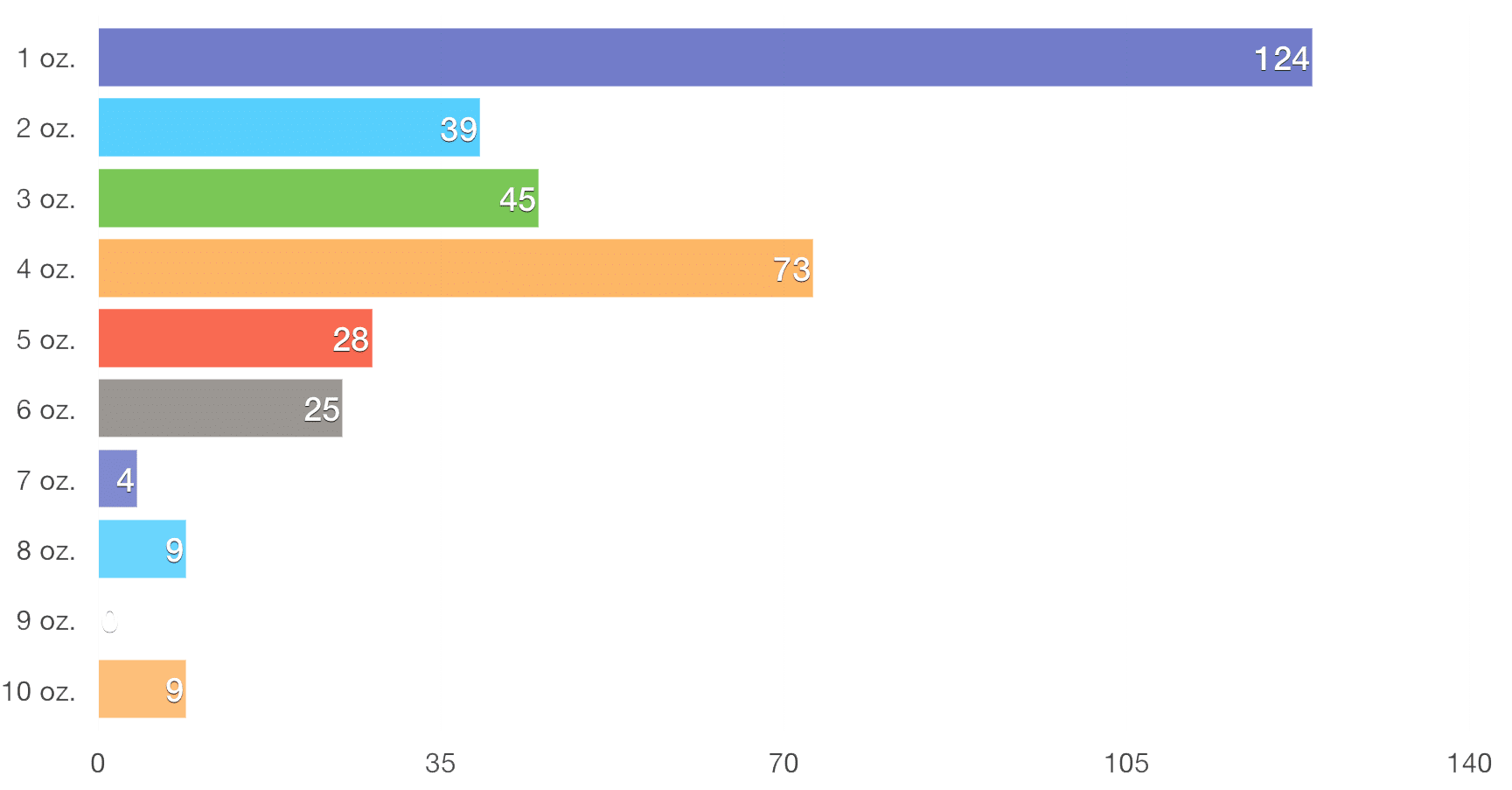 For milk, we had lots of 4-6 oz drinkers, mainly cappuccinos, with some flat whites and cortados sprinkled in there. In general people seem to prefer lighter foam. There’s a lot of different drinks in this approximate range—what do you call the version you serve at G&B? How do you like to make it?

We call our cappuccinos about 7oz, but remember that we’re pulling those shots longer so it’s worth noting that when you talk about the actual proportions it’s going to be dictated by the size of the shot. That’s one of the big complications with a drink like the gibraltar, where it is so dictated specifically by the size of the cup.

We serve cappuccinos, we serve cortados, we serve gibraltars, we serve flat whites as well, and we make distinctions between all of them.

Tell us more about those distinctions.

It should be noted that in a medium and an industry where a majority of what we serve is kept to two different ingredients, coffee and milk, for a barista to abdicate their responsibility for being able to understand the nuances or appreciate the nuances, or manipulate the nuances of those two ingredients together is a little bit, flippant, and maybe irresponsible.

Whenever I go to a place and they say, there’s no difference between a cortado and gibraltar, it’s like, who am I talking to? There is. There definitely is in people’s expectations of what it is. You would hope that a barista would be able to appreciate that, or at very least navigate around it, in a way that’s more accomplished than just saying there’s no difference.

How stiffly foamed do you like your milk drinks?

How do you specifically as a very accomplished, very experienced barista, come to understand the difference between these drinks.

When you are a barista, you are dealing with the specific circumstances that are there at the moment, those circumstances are very rarely going to hew to definitions or expectations 100% of the time.

Talking about customer service stuff, people having varying ideas or inconsistent ideas about drink definitions is like the tip of the iceberg of the stuff you have to deal with when you’re doing customer service. Everybody’s different.

If you serve someone a cappuccino and they’re like “that’s not a cappuccino” then it’s like, “Okay” and you try and figure out what their cappuccino is, and then you make it. I don’t think that’s necessarily an easy thing to do well, but it’s not a super difficult thing, where you’ve got to be the prophesied child who has the magical ability to empathize with customer’s needs. It’s just sort of a skill you pick up over time.

That said, the shop having a specific idea for each one, we try to make a distinction in appreciation of the fact that you can craft slightly different drinks and people prefer different ones.

So for us, you sort of push together the machiatto, gibraltar, cortado, the three that can be a little similar. Since we serve all three in a 4.5oz Libbey cup. For the machiatto we’re not just doing a scoop of foam on top, we are adding milk, but because our coffee has acidity, you have to add enough milk to balance out the acidity while still getting the strength from the espresso. You want the drink to have strong coffee presence—that’s the preference that the customer showed by ordering—but you want the drink to have balance. You have to have enough foam for there to be a textural experience, and the drinking temperature has to be such that the person can immediately drink it. The milk has to be cooler than the espresso basically.

Cortado is a little bit trickier, that’s one where we see a lot of variance, but I would say given the way we do our cappuccinos, which is not the super foamy, a cortado just ends up being a shorter cappuccino, two shots in the 4.5 oz gibraltar cup, good foam, some presence   of heat, but not enough to impede drinking.

The gibraltar, because we pull longer shots, you know if you pulled the 50g shot into a 4.5oz gibraltar cup, the drink would not taste like what people expect from a gibraltar, so we weigh out and use just 35 grams of finished espresso [from the 50g shot], and use that, combined with cooler milk and a thin layer of foam—the drink is meant accentuate the sweetness of the espresso and milk, and be gulpable if need be.

Wait, so what’s a flat white then?

The flat white versus the cappuccino—I’ve been to Australia, I’ve worked in a few shops there just for short periods of time—I would say if I was trying to reproduce the experience of the flat white I had over there, it’d be a single shot in a 5oz cup or 4oz cup. When someone orders the flat white, you’re taking the information that they’re not prioritizing foam, that they do want a strong coffee flavor, but they don’t want it to be to the point of like a macchiato, where you’re getting the balance more towards the espresso than milk, instead you want a balance of milk and espresso.

I’d say it’s similar to the goal of most third-wave cappuccinos in the United States, where the roast and the coffee flavor takes on a pleasant heavy dark chocolate, with the milk. If you’re hitting all those points, then I’d say most people are happy. Whether that’s a 5.6 oz drink or a 7oz drink I don’t think matters to people. We do it in 6.5oz, 7oz cups with a double shot.

That was a beautiful answer, I’m tearing up a bit.

We’ll be back next week with part two of our interview, where Charles talks americanos, adding fancy things to espresso and more.