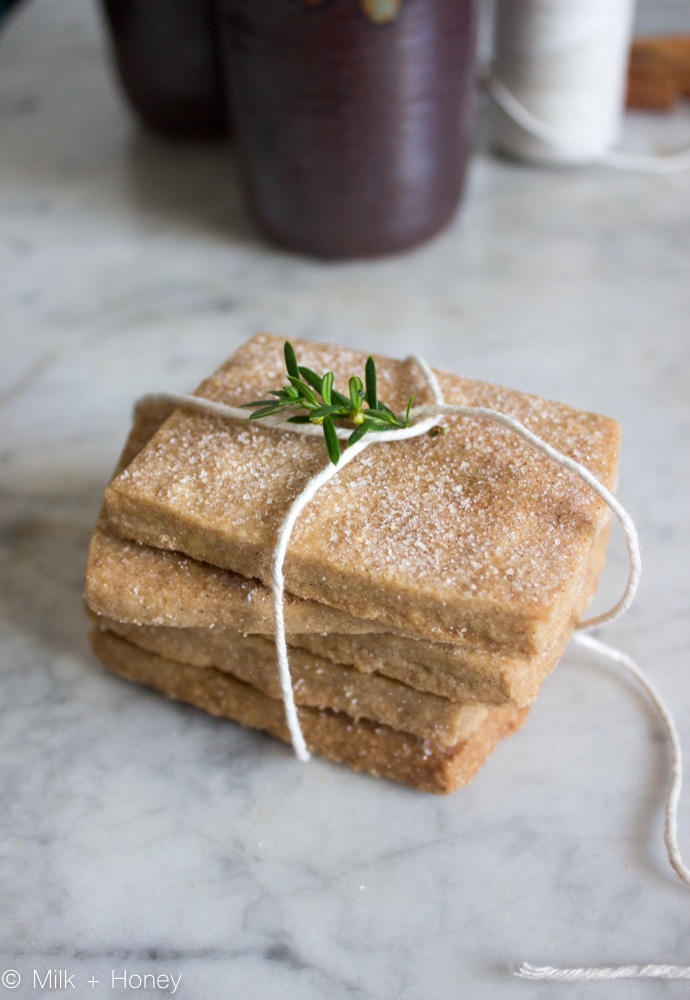 Scotland is said to have a very different culinary history from that of the rest of the UK. Mostly untouched by the Roman influences that England had, they were left to their own devices. Some mistakes were made (haggis), but there are a few triumphs that emerged from that wild 12th century Scotland, shortbread being foremost among them. A reliable cookie in its own right, we amp up the spice, and brown the butter for some really delicious caramel notes that are sure to put you in the holiday spirit.

From Baby Food to Court Darling

Originally, the butter in shortbread was yeast, and shortbread was simply the leftover scraps of bread baked earlier in the day dusted with spices and sugar and left to get hard and crackery in the oven post-bake. These scraps were called “biscuit bread” and were used as a “rusk” or baby teething food.

During Elizabeth I’s reign, Scotland’s culinary scene was much influenced and improved by the French chefs brought there by Mary Queen of Scots. Said to be a great lover of shortbread, under her influence the simple dough reached new heights of refinement and became a common fixture at the royal table.

Shortbread’s rise to fame did not stop at the end of the Elizabethan era but instead continued its meteoric rise until it became the most popular cookie in the United Kingdom; its celebrity status reaching all the way to parliament. In the 1980’s British Parliament threatened to officially change its title of bread to that of a common biscuit (cookie). Under this new classification shortbread would now be under the “biscuit tax”. In a moment of solidarity, the bakers fought back claiming the ancestry of shortbread was a long and noble one and distinctly rooted in bread and so could not be considered just another cookie. In the face of such irrefutable facts, Parliament surrendered and the United Kingdom’s favorite “bread” remained tax-free.

Shortbread, crispy and sweet, it is one of our favorites and pairs perfectly with the Holiday Punch Espresso.

Shortbread Dough:
Cream butter until smooth, whether that be in a standing mixer or with a hand mixer is up to the chef’s discretion. Add the salt, sugar, and cinnamon and cream together until light and fluffy. Add the vanilla, (I like the bolder flavor and the speckles that both paste and bean provide but they are more expensive and can be considered a luxury instead of a necessity) and mix until fully combined.

Add half the flour, mix until just coming together, then add the remaining half mixing again until the dough starts to form a cohesive ball. Empty your bowl onto the counter and using your hands, work it together and form it into a square. Wrap this in plastic and refrigerate for 2 hours or up to 2 days. If making ahead, this dough freezes nicely for up to a month.

Position racks in upper and lower thirds of the oven and preheat to 325F. Prepare 2 pans by lining them with parchment paper.

In a small bowl combine ¼ cup sugar and cinnamon and whisk together, set aside for later use.

Rolling, Scoring, and Baking:
Unwrap the dough and roll out to roughly a 9 x 9-inch square. Frequently turning the dough helps to maintain the shape as you roll.

Using a large knife, score the dough into squares. I like the looks of 2 x 1 inches but the size and shape are once again completely up to you! A cookie cutter works as well.
Dust the tops of the cookies with the cinnamon/sugar mixture. Bake 13-15 minutes or until a golden-brown has been achieved.

These keep very well in an airtight container and can easily be made up to a week ahead of serving without losing flavor or textural integrity.

Pair these with our Holiday Punch Specialty Drink