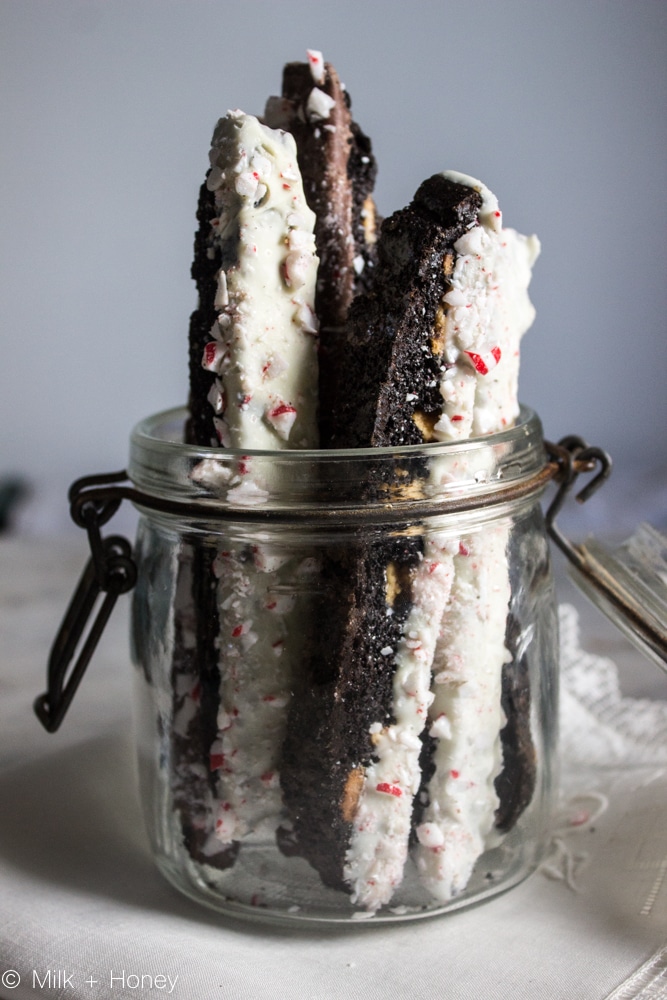 A Recipe by Hannah Abaffy

We’ve all seen them, housed in a tall glass jar just to the left of the cash register at our local coffee shop; slender cookies sometimes dipped in chocolate or studded with nuts and dried fruits, heck, sometimes both. The steady, dependable biscotti, ready and waiting, the happy accompaniment to your morning cup of coffee.

It might come as a surprise then to learn that the unassuming cookie has played such a major role on the world’s stage. In fact, not many foods can boast to have helped shape the world quite the way biscotti has. One could make the argument that without biscotti the Roman empire would not be half of what it was, exploration of the new world may never have happened, and in short, the world as we know it would simply not exist.

An Army Marches on its Stomach

Biscotti, that most ancient of treats, dates all the way back to the 2nd century. Though many associate biscotti with the Tuscany region of Italy, it actually traces its origins back to the ancient Roman Empire. Biscotti, in its primal form, was not made to be an enjoyable dessert but rather as fuel for an army that spent months at a time marching across Europe. Because biscotti are baked not once but twice in an effort to remove moisture, they boast an incredibly long shelf-life making them the perfect food for the army abroad. In fact, biscotti derives its name from the Latin word “biscoctus” meaning twice/baked, making the word a direct reflection of its method of production. Pliny the Elder, Roman savant and general voice of authority up until the middle ages, once asserted that if tried, biscotti would be “edible for centuries”.

Through no fault of biscotti, the Roman Empire eventually fell and central Europe once unified under Roman rule lay fractured. It was a time of war and unrest, and there was little time for developing the arts, culinary or otherwise. Biscotti along with many other foods and traditions fell out of use. This carried on until the Renaissance when a general flowering of all things artistic began again. It was then that biscotti staged its return. Thanks to its hardy nature and resistance to mold and water damage, biscotti, also referred to as hard-tack, became the darling of sailors everywhere and sustained Christopher Columbus and his crew on their voyage to the new world.

You say Cantucci I say Biscotti

Up until the 17th-century biscotti, though useful, remained rather repulsive to the refined eater. Purely utilitarian in nature it was hard as iron and flavor-wise did nothing to excite the palate. That all changed when baker Antonio Matei reintroduced the biscotti to the people of Prato, a small town in the Tuscan region of Italy. Lightly sweetened and flavored with almonds, Matei served biscotti alongside the local dessert wine Vin Santo and called it cantucci. The name change was perhaps an effort to avoid any preconceived notions against the cookie. Hedging his bets, he also urged his customers to dip the hard biscuits into the sweet wine before eating them. An instant success, biscotti shed its old reputation for being a food of last resort and took up the mantle of an enjoyable treat. Something to be savored alongside your digestif or more commonly today beside your morning cup of espresso.

Here’s our interpretation of the ancient favorite: 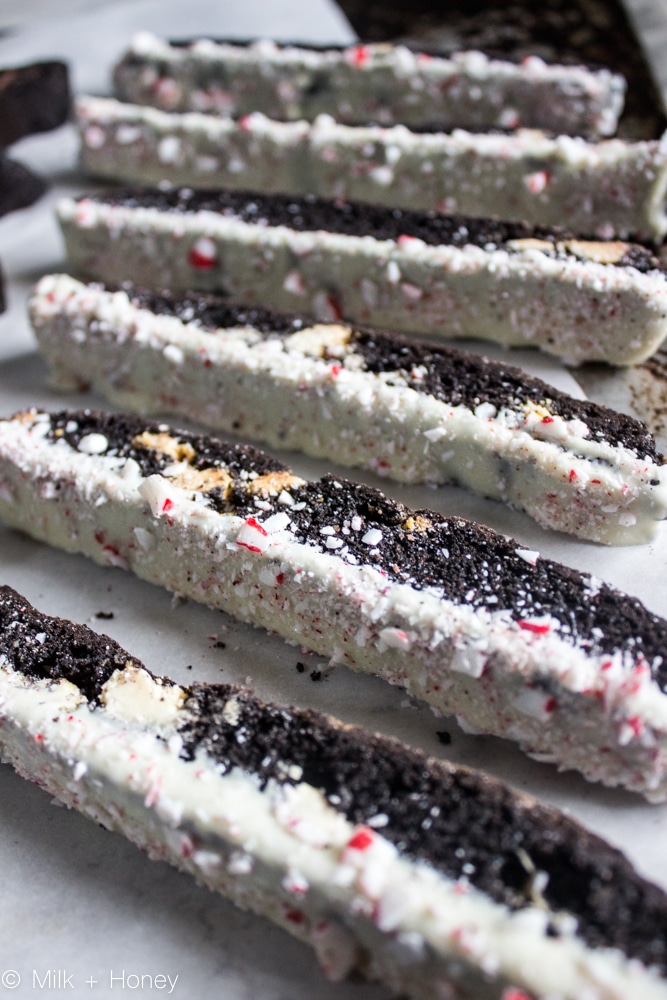 -Though not expressly necessary, we recommend making your biscotti over a two-day period mixing your dough together the first day then shaping and baking off your biscotti the second. Planning ahead makes both steps of the project fast and easy.

Preheat your oven to 350F, and line two baking sheets with parchment paper. If you’d like to go the extra mile, so to speak, you can draw out a 1½ x 10-inch rectangle with a pencil as a guide for your biscotti, being sure to flip the parchment over so you don’t get graphite on your dough.

In the bowl of a standing mixer, cream together butter and both brown and white sugars on medium, until light and fluffy. While these are creaming, sift together all your dry ingredients and set them aside for later use.

By this time your butter and sugar should be in good shape, now add your mint extract. Mix for a few seconds, then begin adding your eggs, one at a time, mixing well after each addition.

Add all dry ingredients in one go, and mix until just combined. Add in your chopped white chocolate and mix again until the chocolate is well dispersed throughout.

–At this point, you can directly transfer your dough to your baking sheets and shape them into two long skinny logs but we recommend refrigerating them first, to make them easier to manipulate. Refrigerate for at least an hour and if time permits overnight.

When ready, shape the dough into two equal logs no wider than two inches (they spread. a lot) and as long as necessary (that usually ends up being about 10-12 inches). When satisfied with the shape achieved, brush the tops of your biscotti liberally with egg wash and place directly in the oven.

Bake 30-40 minutes or until the biscotti bounce back when pressed lightly with a finger. Remove from the oven and allow to cool for 20-30 minutes.

Bring your oven to 325F. With a large serrated knife begin slicing the biscotti logs. We like a sturdy biscotti with some heft so we cut them into 1-inch wide slices, but you can make them thinner or thicker depending on preference. When finished cutting turn the slices cut side down and return them to the oven for another 15 minutes. When you remove them the second time they should be quite crisp.

Once the biscotti have cooled to room temperature, melt the white chocolate adding a small amount of vegetable or coconut oil if the chocolate seems too thick for dipping. Dip the base of each biscotti and transfer to a clean piece of parchment paper. While the chocolate is still melty sprinkle the biscotti with crushed peppermint candies.

Biscotti, as we have previously mentioned, has always been prized for its shelf life, these twice baked cookies will last in a well-sealed container for several weeks and frozen for several months.

Pair these with our Peppermint Mocha at your own #holidayespressoparty